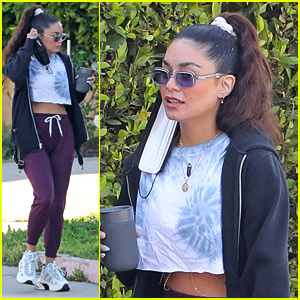 Vanessa Hudgens adjusts her mask hanging from her ear while out on a walk with GG Magree around the neighborhood in Los Angeles on Friday afternoon (April 2).

The 32-year-old actress was all smiles on her walk, where the two friends were joined by her adorable dog, Darla.

During their stroll, Vanessa and GG stumbled upon a tiny hummingbird in some desert greenery and the Princess Switch star shared a funny video on her Instagram where she became “Outback Nessie”.

Earlier this week, Vanessa shared a few new pics with boyfriend, Cole Tucker. Before that, the two were seen had been in Arizona where Cole was in spring training.

The two have been going strong since confirming their romance and coupledom at the beginning of the year.