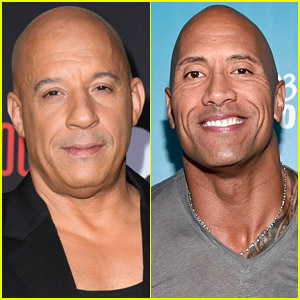 Vin Diesel is shedding light on his famous 2016 feud with Dwayne “The Rock” Johnson.

If you don’t know, The Rock joined the Fast & the Furious franchise back in 2011 with Fast Five. Tension began arising on set in 2016, and actually culminated with Dwayne posting a message on Instagram directed at one of his “candy ass” male co-stars, later revealed to be Vin. Dwayne‘s 2016 Instagram message has since been deleted, but we have the full text right here for you to read!

Now, Vin is speaking out a bit about what went on behind-the-scenes.

“It was a tough character to embody, the Hobbs character,” Vin told Men’s Health about The Rock‘s character. “My approach at the time was a lot of tough love to assist in getting that performance where it needed to be. As a producer to say, Okay, we’re going to take Dwayne Johnson, who’s associated with wrestling, and we’re going to force this cinematic world, audience members, to regard his character as someone that they don’t know—Hobbs hits you like a ton of bricks. That’s something that I’m proud of, that aesthetic. That took a lot of work. We had to get there and sometimes, at that time, I could give a lot of tough love. Not Felliniesque, but I would do anything I’d have to do in order to get performances in anything I’m producing.”

The Rock spoke out about their feud in 2018 and revealed a face-to-face discussion they had in his trailer.

F9 is in theaters this weekend. Vin returns, but The Rock does not star in this one.

See photos from F9 in the gallery of this post…