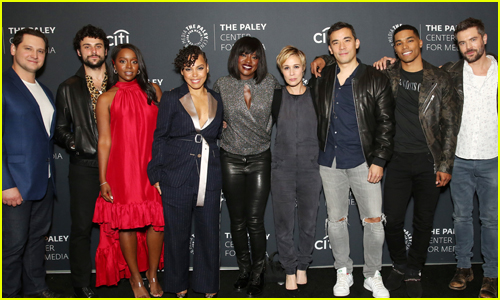 Viola Davis and the cast of How to Get Away with Murder are getting ready to say goodbye to their hit ABC series.

The 54-year-old Oscar winner and her fellow cast mates attended the An Evening with How to Get Away with Murder held during the PaleyLive LA on Tuesday night (November 19) at The Paley Center for Media in Beverly Hills, Calif.

The cast first screened the fall finale which was then followed by a panel discussion.

During the discussion, Viola opened up about how much she has appreciated being able to play Annalise Keating for the past few years.

“Annalise is sexualized and sociopathic. I’m used to wearing aprons and holding babies,” Viola joked. “I remember saying, ‘I want to be a real woman and I don’t have to walk around in heels.’ Because I know y’all talk about me walking in my heels, and that’s a little f–ked up of y’all, but I said yes and it totally changed my life.”

How to Get Away with Murder airs Thursdays at 10/9c on ABC.