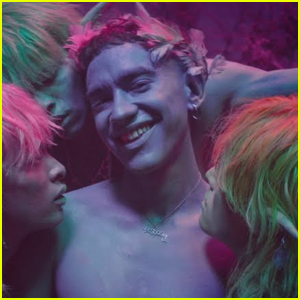 Years & Years is back!

The Olly Alexander-led music project revealed the details of an upcoming album called Night Call, due out on January 7, 2022.

Ahead of the album Olly dropped a brand new track and music video for “Crave,” featuring some of his It’s a Sin co-stars – Omari Douglas, Nathaniel Hall and David Carlisle, as well as Munroe Bergdorf.

“’Crave’ is a playful way of inhabiting the deranged sexual energy I’ve always wanted. In the past I felt like I’ve been dominated by toxic relationships, and I felt like it would be fun to turn it on its head,” Olly said of the song.

Night Call is described as inspired by “Sylvester as it is French House, at the center of the record is that mermaid of a muse: a beautiful icon luring men to their death, on an album partly about those searching for love (or a lover) but ultimately finding power in themselves. Embodying the new perspective of a character –like Ritchie in It’s A Sin – also deeply influenced Olly’s songwriting, with songs that blur the line between fantasy and reality but are bound together by their explorations of queer life.”

“I was writing from a fantastical space, stuck in the same four walls. I wanted to have as much pleasure as possible in the music,” he went on to say.

Check out the music video inside!