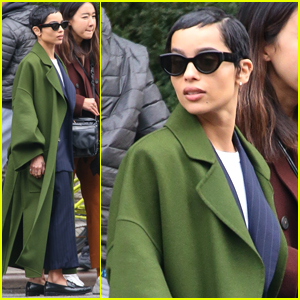 Zoe Kravitz steps out in a long green coat with a friend in New York City on Wednesday afternoon (February 12).

The 31-year-old actress kept it cool while heading to a business meeting with her pal.

Zoe‘s new Hulu series, High Fidelity, is only days away from debuting on the streaming service and she recently chatted with Entertainment Weekly about the show.

“It felt serendipitous and wonderful,” Zoe says about being part of the show, and linking it with the movie which her mom, Lisa Bonet, was in.

She adds, “The funny thing is that I was a huge fan of the movie not because of my mother being involved. My favorite movies growing up were Empire Records and Reality Bites — these angsty movies that talk about almost nothing and everything at the same time. Those kinds of projects are made less and less now. And so it was a lovely coincidence.”

Zoe also opened up about having a hand in the music that’s featured in the show.

“A lot of the music that ended up on the show came from a very, very long playlist I made,” she says. “As we were writing the show, I was just constantly adding to it. It kind of became the soundtrack of the show, of the character.”

Thanks For Following Us