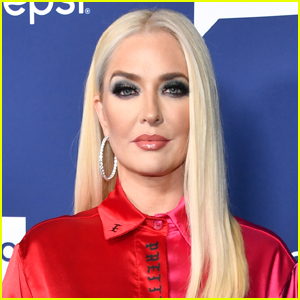 Erika Jayne is speaking out.

The 50-year-old reality star and “Pretty Mess” singer took to social media on Friday (August 20) to respond to some of the threatening messages she’s gotten amid the legal trouble surrounding her estranged husband Tom Girardi.

Erika shared a screenshot of a comment left on a post from a Housewives fan account that read, “REVEALED: RHOBH’s Erika Jayne spent $25M from estranged husband’s law firm on her glam squad, PR firms, a dance agency and 14m in Amex purchases.”

One user tagged the singer’s verified account and commented, ““@theprettymess needs to be executed.”

Erika circled the comment in yellow and wrote in the caption of her post, “Trying to kill me now? Stop threatening my life.

Later that day, she shared a screenshot of “more threats” she received in her DMS.

“Feeling scared yet?” the message said. “The further the season gets, the more you should be worried about being in public…..talk about a marked woman.”

The threats come after recent claims that the reality star’s company had spent more than $25 million on glam, PR and assistants using money transferred from Tom Girardi‘s law firm, per Page Six.

Erika filed for divorce from Tom in November 2020 after 20 years of marriage. A month later, Erika and the 82-year-old lawyer were sued for allegedly faking their divorce to embezzle money that was intended for Tom‘s clients, who were families who lost loved ones in the 2018 Boeing plane crash.

Her legal woes have been a storyline throughout this season of RHOBH, and on a recent episode of the series she alleged that Tom had been having an affair years before their split.

Erika‘s co-star Lisa Rinna also recently spilled some tea about something that happened behind the scenes of the show.