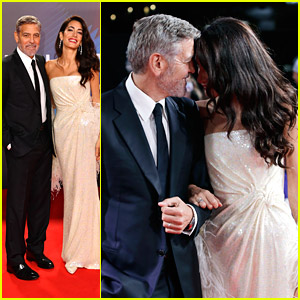 George Clooney and his wife Amal go nose to nose in a cute red carpet moment at the premiere of The Tender Bar during the 2021 BFI London Film Festival at The Royal Festival Hall on Sunday (October 10) in London, England.

The couple walked the red carpet together before heading inside the theater with star Lily Rabe and The Crown star Charles Dance.

Just last week, George and Lily were seen at the LA premiere of the film alongside Tye Sheridan and Ben Affleck.

The Tender Bar is set to open in theaters on December 17.

Just recently, Amal opened up about what George has been doing during quarantine and it involves their twin children, Alexander and Ella.

FYI: Lily wore a Carolina Herrera dress with Boucheron jewelry, Jimmy Choo shoes and clutch, and a coat from Self Portrait.

Click inside for 55+ pictures of George and Amal Clooney, Lily Rabe and more at the premiere of “The Tender Bar”…