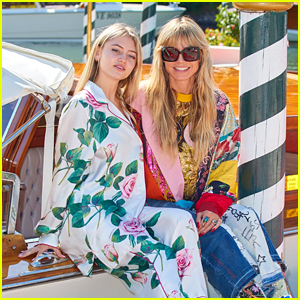 Heidi Klum and her 17-year-old daughter Leni Klum just made a fashionable arrival for the 2021 Venice Film Festival!

The 48-year-old model took a water taxi to her hotel on Friday afternoon (August 27) in Venice, Italy.

The mother-daughter duo were both dressed in head-to-toe Dolce&Gabbana and they’re reportedly in town to attend an event for the fashion brand.

Heidi‘s trip to Italy likely won’t be for that long since she has to be back in Los Angeles by Tuesday for the next live show on America’s Got Talent. The reality competition series is heading into the semi-finals next week and the finale is just a few weeks away.

A few weeks ago, Heidi walked the red carpet with her daughter!