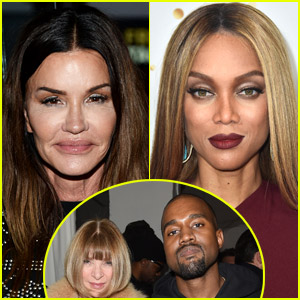 Janice Dickinson did not hold back while making an appearance on the “Behind The Velvet Rope with David Yontef” podcast!

The 66-year-old supermodel spoke out about her time doing America’s Next Top Model with Tyra Banks, and also, made a big reveal about Kanye West and Anna Wintour.

“I was [on] the first, second, third, fourth, fifth, and sixth season [of] that show,” Janice revealed about America’s Next Top Model. “It was wonderful in the aspects where they flew us to marvelous places all over the world. You know, South Africa, Tokyo, Italy, France.”

She added, “We went [to] a lot of places, but sitting next to Tyra for hours and hours can be daunting because she didn’t really like me and we didn’t really get along. And she never did Vogue. I did Vogue. She did Elle and I used to constantly remind her of that. You know, I didn’t really treat her like a producer. She kept saying, ‘but I’m the producer of the show’… I was like, ‘oh yeah, right, whatever.’”

She then alleged that CoverGirl actually picked the winner of the show each season, saying, “I realized that the pick of each show was the choice of CoverGirl, which handed out the winner, the winner’s certificates and the winner’s $100,000. And the chance to have a CoverGirl contract campaign for a year was chosen by CoverGirl and not the model, not the judges.”

She then claimed Tyra gave people McDonald’s for Christmas, saying, “But it would be like doing this show from seven in the morning, until about one or two o’clock at night, it becomes really tiring to be fresh. And [at one] point I did other people’s programs like RuPaul, I did a stint on ‘RuPaul’. That was fabulous. They treated us with respect, not giving us hamburgers or McDonald’s Whoppers for Christmas presents like Tyra would dole out to the crew.”

She then also made a reveal about Kanye West‘s Yeezy, and Anna Wintour.

“Yeezy hired Anna Wintour. Gave her a million bucks to initially get him on his feet as far as colors and style wise,” she continued, adding that it “sure did” work out for him.

Another celebrity seemingly once called Tyra Banks a “mean girl.”