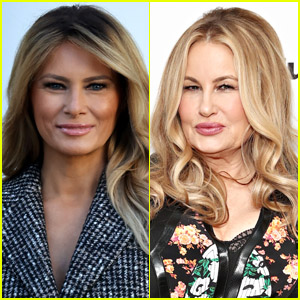 Jennifer Coolidge is ready to take on her next role!

Back in 2018, Melania Trump gave an interview where she was sporting bright blonde hair, prompting people on Twitter to suggest that Jennifer play the former First Lady in a biopic.

In a new interview with The Guardian, the White Lotus actress reacted to fans comments about her and Melania‘s resemblance and shared her thoughts in starring in a movie about her.

“What a compliment. Where do I sign?” Jennifer joked. “Between you and I, though, I’m sure Melania would be bummed.”

When asked about future projects she was looking forward to taking on, the Cinderella Story actress replied, “I’d love to go back to theater and do a serious play. And then the Melania biopic, of course.”

Earlier this year, Jennifer Coolidge revealed whether she’d consider replacing Kim Cattrall in Sex and the City. See her response…