Lady Gaga & Tony Bennett Release ‘I Get a Kick Out of You’ & Announce New Album ‘Love For Sale’! 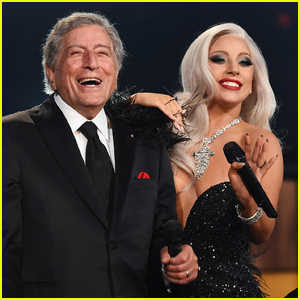 Lady Gaga and Tony Bennett are kicking off their new collaborative era!

The 35-year-old “Stupid Love” singer and the 95-year-old iconic crooner announced their album Love For Sale on Tuesday (August 3).

PHOTOS: Check out the latest pics of Lady Gaga

The album will be released on October 1, and is billed as Tony‘s last studio recording. Earlier in the year, it was revealed that he was diagnosed with Alzheimer’s disease.

The album showcases Cole Porter songbook of classic popular music with both duet and solo offerings from both of the stars.

Their first duet from the record, “I Get a Kick Out of You,” was released upon the announcement in celebration of Tony‘s 95th birthday, as well as the same day as the duo’s Radio City Music Hall performance of One Last Time: An Evening With Tony Bennett and Lady Gaga.

MTV will exclusively air the global premiere of the video for the song on Friday (August 6).

The album follows their No. 1 release Cheek to Cheek in 2015.

In addition, Gaga asked fans to post videos naming one thing they love about Tony to their Instagram Reels using the hashtag #Tonys95thBdayCard!

You’ve got to see the outfits Gaga‘s been rocking at rehearsals!