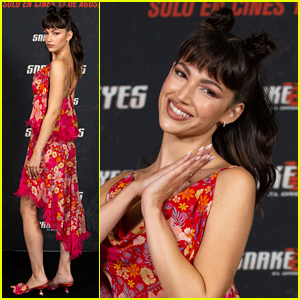 Úrsula Corberó strikes a pose at the photo call for her upcoming film Snake Eyes at the Urso Hotel on Thursday (July 15) in Madrid, Spain.

The 31-year-old Money Heist actress stars in the movie in the role of The Baroness. The film also stars Henry Golding as Snake Eyes, Andrew Koji as Storm Shadow, Samara Weaving as Scarlett, Haruka Abe as Akiko, Tahehiro Hira as Kenta, and Iko Uwais as Hard Master. The movie hits theaters in the US on July 23.

If you don’t know, Úrsula has starred in the smash-hit show Money Heist as the main character of Tokyo. You can stream the show on Netflix before the new season debuts in September!