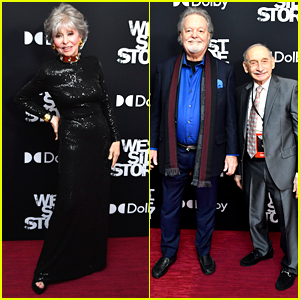 Rita Moreno dazzles in her gorgeous premiere look at the premiere of West Side Story held at Rose Theater, Jazz at Lincoln Center on Monday night (November 29) in New York City.

The 89-year-old actress was joined on the red carpet with fellow original stars Russ Tamblyn and Bert Michaels, who played Riff and Snowboy, respectively, in the 1961 movie.

Russ brought along his daughter, actress Amber Tamblyn, to the premiere.

“I wasn’t aware of that,” Rita said on the red carpet about it being the film’s 60th anniversary. “Really, how amazing. It’s nothing but amazing tonight. That is what this night is about.”

Rita added, “I have opinions and some are not always greeted with enthusiasm but that’s what producers do. It’s an amazing experience.”

West Side Story will be out on December 10.

Click inside to see 10+ pictures of Rita Moreno, Russ Tamblyn and Bert Michaels at the West Side Story premiere…