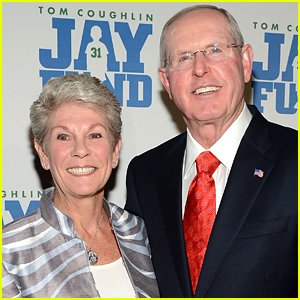 You may know Tom Coughlin as the former head coach of the New York Giants, who won two Super Bowls with the team.

Unfortunately, the 74-year-old coach is now revealing some tragic news about his wife of 53 years, Judy Coughlin. In 2020, Judy was diagnosed with a progressive neurological disorder, and he has become her primary caregiver.

Tom wrote in an op-ed for the New York Times that Judy has progressive supranuclear palsy. According to the Mayo Clinic, it is an “uncommon brain disorder that causes serious problems with walking, balance and eye movements, and later with swallowing.”

“As so many of you are gearing up for another NFL season, I will be sitting far from the sidelines, at the bedside and holding the hand of my biggest supporter, my beloved wife, the mother of our children and a grandmother to our grandchildren,” Tom wrote. “We’ve helplessly watched her go from a gracious woman with a gift for conversation, hugging all the people she met and making them feel they were the most important person in the room, to losing almost all ability to speak and move.”

He continued, “Judy‘s decline has been nothing but gut-wrenching and has placed me in a club with the tens of millions of other Americans who serve as a primary caregiver for a loved one. Admittedly, transitioning from being with an NFL franchise to full-time caregiver wasn’t easy. It’s still not easy.”

He added, “Her days are now filled with lying in bed, watching the Hallmark Channel, sitting in a wheelchair in the sun and receiving round-the-clock care. And what’s worse, she is trapped inside a body that will not allow her to be the person she was.”

“I’ve learned firsthand caregiving is all-consuming,” Tom added. “It is mentally and physically exhausting. Sometimes you just need a break … I’ve spent my entire life preparing for some of the biggest games a person could play, but nothing can prepare you to be a caregiver who has to watch a loved one slip away.”

Tom and Judy were married in 1967. They have 4 adult kids and a total of 11 grandkids. Our thoughts are with the Coughlin family.